View Item
JavaScript is disabled for your browser. Some features of this site may not work without it.

Immunity against measles, mumps, rubella, varicella, diphtheria, tetanus, polio, hepatitis A and hepatitis B among adult asylum seekers in the Netherlands, 2016. 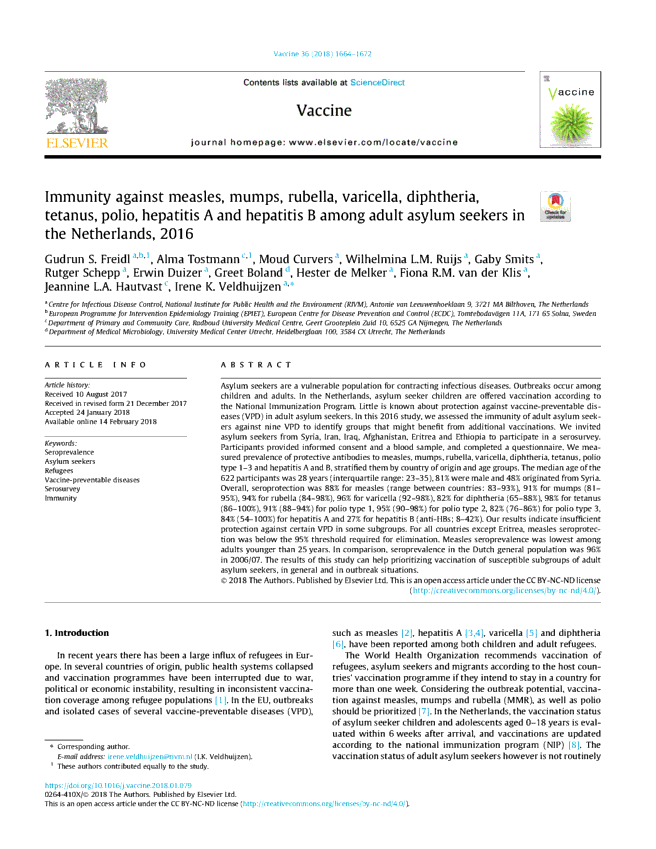 Cast your vote
You can rate an item by clicking the amount of stars they wish to award to this item. When enough users have cast their vote on this item, the average rating will also be shown.
Star rating

Your vote was cast
Thank you for your feedback

Immunity against measles, mumps, rubella, varicella, diphtheria, tetanus, polio, hepatitis A and hepatitis B among adult asylum seekers in the Netherlands, 2016.

Asylum seekers are a vulnerable population for contracting infectious diseases. Outbreaks occur among children and adults. In the Netherlands, asylum seeker children are offered vaccination according to the National Immunization Program. Little is known about protection against vaccine-preventable diseases (VPD) in adult asylum seekers. In this 2016 study, we assessed the immunity of adult asylum seekers against nine VPD to identify groups that might benefit from additional vaccinations. We invited asylum seekers from Syria, Iran, Iraq, Afghanistan, Eritrea and Ethiopia to participate in a serosurvey. Participants provided informed consent and a blood sample, and completed a questionnaire. We measured prevalence of protective antibodies to measles, mumps, rubella, varicella, diphtheria, tetanus, polio type 1-3 and hepatitis A and B, stratified them by country of origin and age groups. The median age of the 622 participants was 28 years (interquartile range: 23-35), 81% were male and 48% originated from Syria. Overall, seroprotection was 88% for measles (range between countries: 83-93%), 91% for mumps (81-95%), 94% for rubella (84-98%), 96% for varicella (92-98%), 82% for diphtheria (65-88%), 98% for tetanus (86-100%), 91% (88-94%) for polio type 1, 95% (90-98%) for polio type 2, 82% (76-86%) for polio type 3, 84% (54-100%) for hepatitis A and 27% for hepatitis B (anti-HBs; 8-42%). Our results indicate insufficient protection against certain VPD in some subgroups. For all countries except Eritrea, measles seroprotection was below the 95% threshold required for elimination. Measles seroprevalence was lowest among adults younger than 25 years. In comparison, seroprevalence in the Dutch general population was 96% in 2006/07. The results of this study can help prioritizing vaccination of susceptible subgroups of adult asylum seekers, in general and in outbreak situations.

The export option will allow you to export the current search results of the entered query to a file. Different formats are available for download. To export the items, click on the button corresponding with the preferred download format.

By default, clicking on the export buttons will result in a download of the allowed maximum amount of items.

To select a subset of the search results, click "Selective Export" button and make a selection of the items you want to export. The amount of items that can be exported at once is similarly restricted as the full export.

After making a selection, click one of the export format buttons. The amount of items that will be exported is indicated in the bubble next to export format.